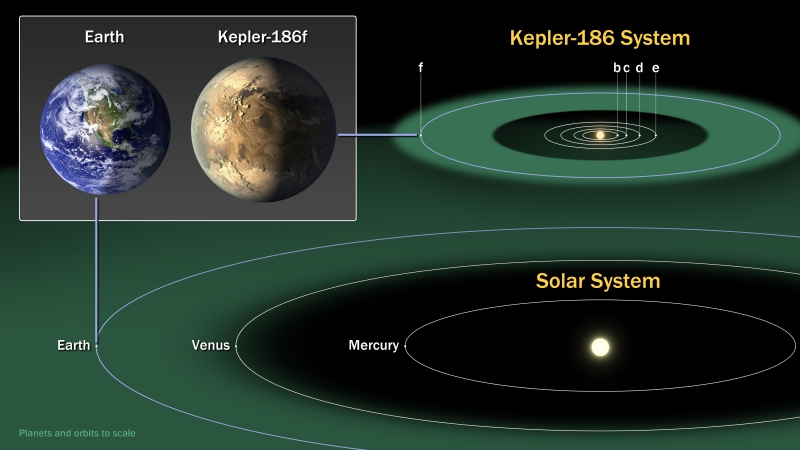 Kepler-186 and the Solar System: The diagram compares the planets of the inner solar system to Kepler-186, a five-planet system about 500 light-years from Earth in the constellation Cygnus. Credit NASA AMES/SETI Institute/JPL-CalTech

Kepler-186 and the Solar System: The diagram compares the planets of the inner solar system to Kepler-186, a five-planet system about 500 light-years from Earth in the constellation Cygnus. The five planets of Kepler-186 orbit a star classified as a M1 dwarf, measuring half the size and mass of the sun. The Kepler-186 system is home to Kepler-186f, the first validated Earth-size planet orbiting a distant star in the habitable zone—a range of distances from a star where liquid water might pool on the surface of an orbiting planet. The discovery of Kepler-186f confirms that Earth-size planets exist in the habitable zone of other stars and signals a significant step closer to finding a world similar to Earth. Kepler-186f is less than ten percent larger than Earth in size, but its mass and composition are not known. Kepler-186f orbits its star once every 130-days and receives one-third the heat energy that Earth does from the sun, placing it near the outer edge of the habitable zone. The inner four companion planets all measure less than fifty percent the size of Earth. Kepler-186b, Kepler-186c, Kepler-186d, and Kepler-186e, orbit every three, seven, 13, and 22 days, respectively, making them very hot and inhospitable for life as we know it. The Kepler space telescope, which simultaneously and continuously measured the brightness of more than 150,000 stars, is NASA’s first mission capable of detecting Earth-size planets around stars like our sun. Kepler does not directly image the planets it detects. The space telescope infers their existence by the amount of starlight blocked when the orbiting planet passes in front of a distant star from the vantage point of the observer. The artistic concept of Kepler-186f is the result of scientists and artists collaborating to help imagine the appearance of these distant worlds. Credit NASA AMES/SETI Institute/JPL-CalTech