Scientists have long struggled to detect the dim dwarf galaxies that orbit our own galaxy. So it came as a surprise on Jan. 18 when a team of astronomers using Keck II telescope’s adaptive optics has announced the discovery of a dwarf galaxy halfway across the universe.

The new dwarf galaxy found by MIT’s Dr. Simona Vegetti and colleagues is a satellite of an elliptical galaxy almost 10 billion light-years away from Earth. The team detected it by studying how the massive elliptical galaxy, called JVAS B1938 + 666, serves as a gravitational lens for light from an even more distant galaxy directly behind it. Their discovery was published in the Jan. 18 online edition of the journal Nature.

Like all supermassive elliptical galaxies, JVAS B1938 + 666’s gravity can deflect light passing by it. Often the light from a background galaxy gets deformed into an arc around the lens galaxy, and sometimes what’s called an Einstein ring. In this case, the ring is formed mainly by two lensed images of the background galaxy. The size, shape and brightness of the Einstein ring depends on the distribution of mass throughout the foreground lensing galaxy. 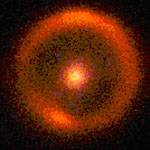 The gravitational lens B1938+666 as seen in the infrared when observed with the 10-meter Keck II telescope with Adaptive Optics on Mauna Kea, credit: D. Lagattuta / W. M. Keck Observatory

Vegetti and her team obtained extra sharp near-infrared image of JVAS B1938 + 666 by using the 10-meter Keck II telescope and its adaptive optics system, which corrects for the blurring effects of Earth’s atmosphere, and provides stunningly sharp images. With these data, they neatly determined the mass distribution of JVAS B1938 + 666 as well as the shape and brightness of the background galaxy.

The researchers used a sophisticated numerical technique to derive a model of the lens galaxy’s mass, as well as to map any excess lens mass that could not be accounted for by the galaxy. What they found was an excess mass near the Einstein ring that they attributed to the presence of a satellite, or “dwarf,” galaxy. Vegetti’s team also used a separate analytical model to test the detected excess mass. They found that a satellite galaxy is indeed required to explain the data.

“This satellite galaxy is exciting because it was detected in the excess-mass map despite its low mass,” commented Robert Schmidt of the Center for Astronomy at Heidelberg University, in a related Nature article. “A natural question to ask is whether the satellite galaxy can be observed directly rather than by its gravitational effect on the shape of a background object. With current instrumentation, the answer is no. The object is simply too distant to be imaged directly. But the message here is that it is possible to spot these elusive objects around distant lens galaxies without knowing where to look for them.”

Galaxies like our own are believed to form over billions of years through the merging of many smaller galaxies. So it’s expected that there should be many smaller dwarf galaxies buzzing around the Milky Way. However, very few of these tiny relic galaxies have been observed which has led astronomers to conclude that many of them must have very few stars or possibly may be made almost exclusively of dark matter.

Scientists theorize the existence of dark matter to explain observations that suggest there is far more mass in the universe than can be seen. However, because the particles that make up dark matter do not absorb or emit light, they have so far proven impossible to detect and identify. Computer modeling suggests that the Milky Way should have about 10,000 satellite dwarf galaxies, but only 30 have been observed.

“It could be that many of the satellite galaxies are made of dark matter, making them elusive to detect, or there may be a problem with the way we think galaxies form”, says Vegetti.

“The existence of this low-mass dark galaxy is just within the bounds we expect if the Universe is composed of dark matter which has a low temperature. However, further dark satellites will need to be found to confirm this conclusion,” says Vegetti.

The W. M. Keck Observatory operates two 10-meter optical/infrared telescopes on the summit of Mauna Kea on the Big Island of Hawaii. The twin telescopes feature a suite of advanced instruments including imagers, multi-object spectrographs, high-resolution spectrographs, integral-field spectroscopy and a world-leading laser guide star adaptive optics system which cancels out much of the interference caused by Earth’s turbulent atmosphere. The Observatory is a private 501(c) 3 non-profit organization and a scientific partnership of the California Institute of Technology, the University of California and NASA.