A team of astronomers has used the Subaru Telescope and the W. M. Keck Observatory to discover the most distant galaxy yet, at 12.91 billion light-years from the Earth. This new galaxy, dubbed SXDF-NB1006-2, is slightly farther away than the previous record holder, galaxy GN-108036, which was found last year.

To identify SXDF-NB1006-2, the team used the Subaru Telescope to observe a total of 37 hours in seven nights in two wide fields of the sky. The team, led by Takatoshi Shibuya (The Graduate University for Advanced Studies, Japan), Dr. Nobunari Kashikawa (National Astronomical Observatory of Japan), Dr. Kazuaki Ota (Kyoto University), and Dr. Masanori Iye (National Astronomical Observatory of Japan), carefully processed the images they had obtained. Shibuya measured the color of 58,733 objects in the images and identified four galaxy candidates at a redshift of 7.3, which translates into about 12.9 billion light-years. A careful investigation of the brightness variation of the objects allowed the team to narrow down the number of candidates to two. 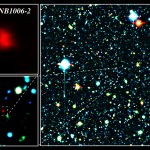 Finally, the team needed to make spectroscopic observations to confirm the nature of these candidates. They observed the two galaxy candidates with two spectrographs, the Faint Object Camera and Spectrograph (FOCAS) on the Subaru Telescope and the Deep Imaging Multi-Object Spectrograph (DEIMOS) on the Keck II Telescope, and identified one candidate for which a characteristic emission line of distant galaxies could be detected. The results are slated to be published in the June 20, 2012, edition of Astrophysical Journal.

In addition to locating the galaxy, the team’s research verified that the proportion of neutral hydrogen gas in the 750-million-year-old early Universe was higher than it is today. These findings help to decipher the early Universe during the “cosmic dawn,” when the light of ancient celestial objects and structures first appeared. They concluded that about 80 percent of the hydrogen gas in the ancient Universe, 12.91 billion years ago at a redshift of 7.2, was neutral.

To put this into perspective, astronomers think that our Universe began 13.7 billion years ago at the Big Bang. The extreme temperature and density of this fireball decreased rapidly as its volume increased. Hot cosmic plasma composed mainly of protons and electrons recombined to form neutral hydrogen atoms within 380,000 years after the Big Bang; this was the beginning of the cosmic “dark age.” From then on, the gas continued to cool and fluctuated in density.

About 200 to 500 million years after the Big Bang, the dense parts of neutral hydrogen clouds contracted under their own gravity, and the first stars and galaxies formed. The radiation from this first generation of stars started to heat and reionize the hydrogen in nearby space, eventually leading to the reionization of the entire Universe. This was the era of “cosmic reionization” (Figure 1) or the “cosmic dawn.” The current team focused their research on identifying the exact epoch of the cosmic dawn in an effort to answer major astronomical questions about the history of our Universe.

Although finding just one galaxy at a critical epoch is exciting by itself, it is not a sufficient sample to characterize the entire epoch. Precise measurement of the number of galaxies during the cosmic dawn requires surveys of even wider fields, which are being planned with new, more sensitive and faster instruments. One is the newly commissioned MOSFIRE (Multi-Object Spectrometer For Infra-Red Exploration) instrument on the Keck I Telescope.

“I reckon that MOSFIRE will observe very faint targets more than a hundred times faster than has ever been possible,” says Caltech astronomer Chuck Steidel, MOSFIRE’s co-principal investigator whose research includes the formation of early galaxies. “All the observations that my group and I have done in near-infrared spectroscopy with Keck over the last ten years could be done in just one night with MOSFIRE.”