In the beginning, galaxies were hot and clumpy – too hot to settle down and form grand spirals like the Milky Way and other galaxies seen in the nearby universe today. But astronomers have now been surprised by the discovery of a solitary grand design spiral galaxy in the early universe which could hold clues to how spirals start to take shape. The find was announced in a report in the July 19 edition of the journal Nature.

The ancient spiral, called BX442, was found by astronomers who first surveyed 300 distant galaxies using the Hubble Space Telescope, then followed up and confirmed using detailed observations and analyses from the W. M. Keck Observatory in Hawaii. 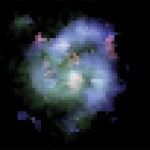 “As you go back in time to the early universe — about three billion years after the Big Bang; the light from this galaxy has been travelling to us for about 10.7 billion years —galaxies look really strange, clumpy and irregular, not symmetric” said astronomer Alice Shapley of UCLA. “The vast majority of old galaxies look like train wrecks. Our first thought was, why is this one so different, and so beautiful?”

Not only was the spiral shape clearly visible, but by using Keck’s OSIRIS instrument (OH-Suppressing Infrared Imaging Spectrograph), astronomers were able to study different parts of BX442 and determine that it is, in fact, rotating and not just two unrelated disk galaxies along the same line of sight that give the appearance of being a single spiral galaxy.

“We first thought this could just be an illusion and that perhaps we were being led astray by the picture,” said Shapley, a coauthor on the Nature paper. “What we found when we took spectra of this galaxy is that the spiral arms do belong to this galaxy; it wasn’t an illusion. Not only does it look like a rotating spiral disk galaxy; it really is. We were blown away.”

Using laser adaptive optics (AO) to cancel out much of the Earth’s atmospheric distortions, the Keck II Telescope is able to get equal or better resolution than the Hubble Space Telescope. This was critical in this case, said astronomer David Law of the Dunlap Institute for Astronomy & Astrophysics at the University of Toronto and the lead author on the paper.

“Galaxies at this distance appear super, super faint and super, super tiny,” said Law. “We needed every inch of Keck’s light collecting area, exquisite image quality from the AO system, and a sensitive instrument to not only detect the galaxy but chop up its light into 3,600 pieces to analyze. OSIRIS is really one of the only instruments in the world that could do what we needed, and everything came together beautifully.”

In the end, it took thirteen hours over three nights with the Keck II Telescope to gather the spectra from BX422 needed to confirm the nature of the distant and early spiral.

“We got a beautiful map that told us this thing is a rotating disk,” said Shapley.

What also sets BX442 apart from other galaxies of its epoch is that it appears to be in the process of merging with another galaxy. That, in fact, could be the reason it is beginning to form a spiral.

“Indeed, many of the most well-known grand design spiral galaxies in the nearby universe (e.g., M51, M81, M101) are observed to have nearby companions, and small satellites such as the Sagittarius dwarf galaxy may even be partly responsible for producing spiral patterns in our own Milky Way galaxy,” the researchers wrote in their paper.

They tested the idea with a simulation and found that the spiral pattern could be formed by such a merger. The simulations indicate that its glory may be fleeting though; the spiral may dissipate again in just 100 million years.

“BX442 represents a link between early galaxies that are much more turbulent and the rotating spiral galaxies that we see around us,” Shapley said. “Indeed, this galaxy may highlight the importance of merger interactions at any cosmic epoch in creating grand design spiral structure.”