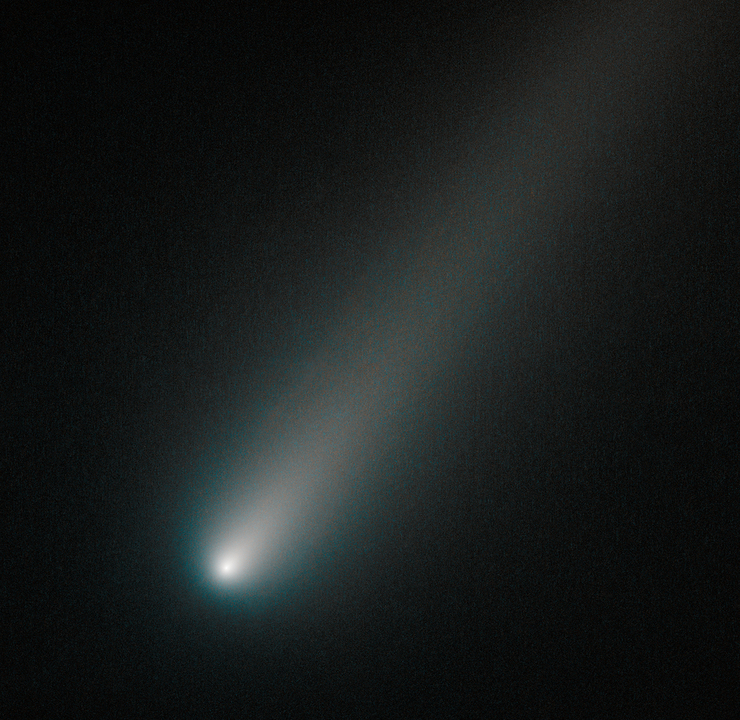 The photographic proof is in: Reports of Comet ISON’s demise were greatly exaggerated. Contrary to some pessimistic predictions, new Hubble data show the comet still trucking along as it falls inward of Mars and ever closer toward the Sun.

This new image, recorded by Hubble on October 9, combines long exposures taken through blue and red filters. Over 29 minutes, Hubble switched back and forth between these filters as it tracked Comet ISON across the sky.

What little color ISON has is due to differences between a comet’s coma and its tail. The tail, comprised of dust particles torn away from the comet by the gentle pressure of sunlight, appears redder because dust grains reflect redder light. The coma, by contrast, is bluer. It doesn’t contain much dust, just gas sublimating from the comet’s surface.

The comet’s nucleus, estimated at less than 2 kilometers in diameter, is tiny even through Hubble’s eagle eyes. A single pixel in this image spans 55 km of comet, making the nucleus un-resolvable at this separation (about twice the Earth-Sun distance). Still, careful study of this image suggests the nucleus is almost certainly still intact — the coma spreads out evenly from a single point, which we wouldn’t see if ISON were falling to pieces.

In fact, the symmetry of ISON’s coma suggests that the comet’s entire Sun-facing surface is feeding the coma — no jets of gas have been spotted in this image. Without a jet to spin it around (see: WALL-E & Gravity, “fire extinguisher”) ISON likely isn’t rotating much. This suggests an exciting potential future: Perhaps there’s a “dark” side of ISON, which won’t have ever seen the light of day until the comet goes around the Sun. If such pristine material still exists, ISON may become more active than we currently expect.

One mystery remains. How has ISON — humble, patient, surprisingly average Comet ISON — sparked predictions that run the gamut from “bright as the full moon” to “disintegrating as we speak”? Simply put, ISON peaked early. When it was first discovered, way out past Jupiter, ISON was really bright. Extrapolated, those first data points made ISON look like it would shine even more as it got closer — and when it didn’t, the coverage seesawed back toward calling ISON a total bust.

According the University of Maryland’s Mike A’Hearn, that’s the curse of “dynamically new” comets, including the infamous Kohoutek. In the first four billion years of its life, ISON never once strayed into the protective umbrella of the solar wind. Without that protection, the comet’s surface was bombarded by galactic cosmic rays: high-energy particles from exotic places like the rims of black holes. That irradiated surface became fragile, volatile — only a little heat from the Sun was enough to sublimate a huge amount of gas, causing ISON’s brightness to spike early on. This is just one interpretation — Karen Meech from the University of Hawaii argues that an outburst of carbon monoxide better explains that early brightness — but the consequences still stand. ISON, like a burnt-out former child actor, has been unfairly judged by the benchmark of its own prodigious standard.