One week from today, on March 3rd, the planet Mars will pass through opposition.

Mars orbits the Sun every 1.88 years, with Earth only taking one year for each orbit. Like two runners on a track the two planets race each other around the Sun. But we have the inside lane, lapping the red planet every two years. These events are called opposition, when Mars is closest to us and best positioned for viewing by earthbound telescopes.

Closest approach of the two planets is not necessarily on the same day as opposition, but can vary up to two weeks. This year closest approach will occur March 5th with the two planets approaching to 99,331,411 km (61,721,554 miles) at 07:01HST.1 At this distance the red planet will show a disk 13.89″ arc-seconds across in the eyepiece.2 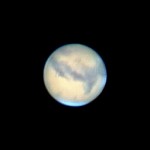 Mars during the 2005 opposition

Do not worry about viewing on the 3rd or 5th, any time in the month leading up to and after opposition the viewing will be very good. With even a modest telescope it should be possible to see the bright polar caps and light and dark markings on the planet.

All month Mars will be visible throughout the night, high in the sky at midnight. This is the time to enjoy observing our closest neighboring planet while it is nearby and high in the night sky.