How do we measure things in the sky?

Throughout the descriptions of astro-happenings here on Darker View, I use the terms degrees, arc-minutes, and arc-seconds. This is how astronomers measure size and separation of objects in the sky.

The degrees used by astronomers are the same as those you learned in high school geometry, the same as marked on that old school protractor forgotten in the back of the desk drawer. 360 degrees mark a circle, 360 degrees reach once around the sky.

Degrees measure rotation, and just about everything in astronomy rotates… As the Earth rotates on is axis, the sky goes wheeling overhead. When we move a telescope from one point in the sky to another we rotate the telescope about its axis. How far does it rotate? That is measured in degrees.

Standing under a dark sky it is easy to begin using this sort of angular measurement. Straight overhead is a point called zenith, this is 90° from the horizon. Something half-way from the horizon to zenith is 45° from the horizon. Look due east, then turn to the right to look due south, you have just swung through 90°. 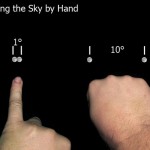 In astronomy we need to measure small differences in angle, thus it is useful to use smaller units than degrees to get better precision. One can simply add a few decimal places to indicate better precision, and this is often done. However the older, traditional way is to use arc-minutes and arc-seconds, an idea which parallels time-keeping.

In addition to degrees you will also find hours used to indicate a position. Hours are used to measure right ascension, the distance east or west in the sky. Declination (north and south) is indicated in degrees. As there are 24 hours and 360 degrees it is fifteen degrees per hour.

Why is it this way? 360 and 60 seem like odd numbers to measure something. What you have to remember is that in navigation and astronomy angles and time are intimately related. As the Earth rotates, as the stars wheel overhead, you can measure time by measuring the motion. To find something in the sky you must add the time to the celestial coordinates (the right ascension) of the object. Having both of these numbers expressed with hours, minutes, and seconds makes the math easy, particularly when all calculations were a pen and paper exercise. The sky simply becomes a large clock, no surprise, it is the original clock.

Arc-minutes are often abbreviated with a single quote, arc-seconds with a double quote. Thus an angle could be written as 25°10’45” denoting 25 degrees, 10 arc-minutes, and 45 arc-seconds. Stellar coordinates are often written in this notation. Simply using decimal places, 4.5° is the same as 4°30′.

When measuring things in angular size, we ignore the distance to the objects. While it might appear that Jupiter is only two degrees from the Moon in the sky, this is just what we see from our point of view. In reality the Moon is a mere quarter-million miles away, while Jupiter is hundreds of millions of miles distant, vastly further. It is correct to append the word “apparent” to an angular size. While the object appears to be 10 arc-minutes across, when it may actually be light-years across.

For an amateur skywatcher looking up at the night sky, the skill of estimating distances in degrees is quite useful and worth learning. You will know where to look for any particular object, how high in the sky, or how far from something you can easily find.

The Sun and Moon are quite close to half a degree across, 30 arc-minutes. When estimating a few degrees simply imagine a few widths of the Moon in place of the angle you need. Thus two degrees would be the same as four full Moons, side-by-side.

One degree is about the same as the width of your little fingertip held at arm’s length. The back of your fist, across the top of the four finger knuckles is about ten degrees when held at arm’s length. This is a quick and approximate way that can be improved by actually checking with some known stars. I find my little finger is a bit fat, about 1.5°, and my fist about 9° across the knuckles.

The sky rotates about 15° each hour, adding up to 360° each 24 hours. Objects near the eastern and western horizons will move (very roughly depending on your latitude) this far. Thus a star rising in the east will be 15° above the horizon in an hour, 30° in two hours.

3 thoughts on “Degrees, Arc-Minutes and Arc-Seconds”