While much of the attention is on the lava flows and burning homes in lower Puna, there have been dramatic events at the summit of Kīlauea. The pit crater of Halemaʻumʻau that has been the subject of untold thousands of tourist photos has become almost unrecognizable.

Halemaʻumʻau is a pit crater created by the ever changing eruptions of Kīlauea. Half a mile across, this crater sits within the much larger Kīlauea caldera at the summit of the volcano. A nearly circular pit that lies at the center, home to many eruptions across the centuries. This often fiery pit is reputed to be the home of Pele, the goddess of fire and creation in Hawaiian mythology.

Halemaʻumʻau was once a major stop on the Hilo tour circuit. Tour buses disgorging loads of visitors to gawk at the heart of the volcano. A large parking area and viewpoint could be found on the southern rim of the crater. At the overlook one could peer down at the crater floor hundreds of feet below and watch the steam vents.

Prior to 2008 the floor of the crater was a mostly flat plain, created by lava partially filling the crater in 1974 and creating a short lived lava lake. Across the floor of this pit crater were small fumaroles emitting steam, betraying hotter material below.

It is this Halemaʻumʻau that I first knew, on family visits to the islands in the 1990’s, when hiking the caldera with visiting friends. I remember approaching from across the caldera floor, on the trail from Waldron Ledge and Kīlauea Iki. You would arrive at the rim and look down into the pit of Halemaʻumʻau, a yawning crater that so perfectly exemplified the volcano.

Halemaʻumʻau has not always appeared thus. At times it has been a churning lake of lava, at others a seemingly bottomless yawning pit. The only constant here is the pit itself, otherwise it is always changing.

In the 1860’s Samuel Clemens, also known as Mark Twain, visited the caldera of Kīlauea. His vivid description of this visit describes a boiling lake of lava here at Halemaʻumʻau. Indeed, for much of the recorded history of Kīlauea this crater has hosted a lava lake.

Years ago I yearned to see such a sight, to see churning lava replace that flat crater floor. In my mere ten years on-island, a blink in the history of this place, I have seen that and much more.

The spectacle presented was worth coming double the distance to see. Under us, and stretching away before us, was a heaving sea of molten fire of seemingly limitless extent. The glare from it was so blinding that it was some time before we could bear to look upon it steadily. – Samuel Clemens (Mark Twain) in his 1872 book Roughing It.

The changes began when the Overlook Vent opened in 2008. Heralded by an explosion of steam, ash, and flying rock, a large pit opened just underneath the tourist viewpoint. Fortunately this occurred at night, before the tour buses arrived for the day.

The park rangers immediately closed the section of Crater Rim Drive. Since this time the area immediately around Halemaʻumʻau has been closed to the public, best observed from the Jaggar Museum overlook a mile away.

Describing this new feature was often confusing to some. It was a vent, within a pit crater, within a caldera.

Before long a lava lake appeared in the new Overlook Vent. A nearly constant column of steam and gas rose above, brightly lit orange at night by the lava below in the pit.

The original vent was small, 20-30 yards across. Over time this slowly grew, with the changing lava level in the lake and rockfalls the Overlook Vent grew to hundreds of yards across. Through the USGS webcams on the crater rim you could watch the lava within.

The lava lake remained out of view, at least for those who followed the rules and used the Jaggar viewpoint. It was not until 2015 that the lava lake first rose high enough to be seen from the viewpoint.

The newly visible lava lake was an instant sensation, thousands flocking to see the lava. Among those who went to see it on that first night was myself, making a predawn run across the island to watch the lake churn and froth.

Deb and I went again the next weekend, arriving early to beat the crowds. Stunned by the numbers that arrived behind us, and were still arriving as we left well into the night. In the intermittent rain we watched the lava, often sharing my small telescope with other visitors. That night we watched as the lake overflowed, covering the 1974 lavas with a fresh layer of black.

Lava Lake at Halemaʻumaʻu from Andrew Cooper on Vimeo.

Change came again last month. After over three decades of eruptions at Puʻu Oʻo on the flank and a decade of a lava lake at Halemaʻumaʻu at the caldera, there were signs things were amiss. The 61G lava flow had become inactive. More ominously the pressure at both Puʻu oʻo and at Halemaʻumaʻu was building. The tilt-meters indicating increased inflation of the volcano, the level in the lava lake rising higher than ever before.

In all our speculation we did not expect it to be as destructive as it became. The lava broke out right in the middle of a neighborhood, taking homes and dreams in rivers of red flowing rock.

While lava flowed through the streets of Leilani Estates it drained away from Puʻu Oʻo and the lake at Halemaʻumaʻu higher on the mauna. The lake disappeared, sinking out of sight into the depths.

With that withdrawal a new hazard appeared, possible steam driven explosions as the water table was allowed to encroach into the pit beneath Halemaʻumaʻu.

These explosions echo those of 1924, when a very similar set of events took place at Halemaʻumʻau, the lava dropping deep into the vent. Reading the records of 1924 HVO geologists warned of what would happen, a warning that proved completely accurate.

The explosions wrough other changes in the crater… Just a few days ago the plume subsided enough to get a good look at what has become of Halemaʻumaʻu. A USGS drone flew over the crater providing a clear video of the latest changes.

Much of the old floor has collapsed, along with large sections of the old rim. Occupying over half of the crater is a far deeper pit choked with vast piles of rubble. 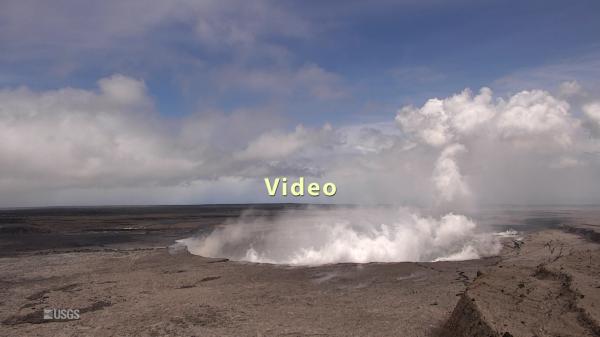 The Halemaʻumʻau I have known for decades is completely altered. There is still a crater, it will never be the same. The latest chapter of the volcano is being written as we watch. Close watchers of the volcano wonder what will happen next.

Personally I would love to see lava reappear here. Not just because it would be cool to see and photograph an expanded lava lake. Lava returning to the summit would mean an end to the explosive eruptions showering ash and Pele’s hair across the southern sections of the islands. It would also likely mean an end of the eruptions currently flowing through homes and farms in lower Puna.

What does happen next? No way to know, this volcano is ever changing. Please stand by.

3 thoughts on “Changes at Halemaʻumʻau”