A 10,000-pound package was delivered on Feb. 16 to the W. M. Keck Observatory near the summit of Mauna Kea. Inside is a powerful new scientific instrument that will dramatically increase the cosmic data gathering power of what is already the world’s most productive ground-based observatory.

The new instrument is called MOSFIRE (Multi-Object Spectrometer For Infra-Red Exploration). It is the newest tool to survey the cosmos and help astronomers learn more about star formation, galaxy formation and the early universe. The spectrometer was made possible through funding provided by the National Science Foundation and a generous donation from astronomy benefactors Gordon and Betty Moore.

“This is a crucial and important step,” said MOSFIRE co-principal investigator Ian McLean of U.C. Los Angeles, who has been involved in the building of four instruments for the Keck telescopes. “Just shipping it to Hawaii is the first step.” A long series of installation steps are already underway that will lead up to MOSFIRE’s “first light” on the sky and handover to the Keck community in August. 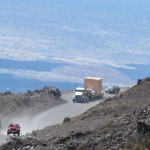 The truck carrying MOSFIRE was escorted by police, Mauna Kea rangers and Keck Observatory personnel as it climbed the last few thousand feet to the summit. Photo by Larry O’Hanlon

MOSFIRE will gather spectra—chemical signatures in the rainbows of light from everything from stars to galaxies—at near-infrared wavelengths (0.97-2.45 microns, or millionths of a meter). That’s light which is beyond the red end of a rainbow—just a bit longer wavelength than human eyes can see. Observing in the infrared allows researchers to penetrate clouds of dust to see objects that are otherwise obscured. It also allows for the study of the most distant objects, the spectra of which have been stretched beyond optical wavelengths by the expansion of the universe.

“I reckon that MOSFIRE will observe very faint targets more than a hundred times faster than has ever been possible,” says Caltech astronomer Chuck Steidel, MOSFIRE’s co-principal investigator. “All the observations that my group and I have done in near-infrared spectroscopy with Keck over the last ten years could be done in just one night with MOSFIRE.”

Steidel anticipates that MOSFIRE will be one of the Keck’s workhorse instruments, used for about half of all telescope time on the Keck I Telescope. “It’s opening up a whole new area of study.”

Another big asset of MOSFIRE is that it can scan the sky with a 6.1 arc minute field of view, which is about 20 percent of a full moon and nearly 100 times bigger than the Keck’s current near-infrared camera. To take spectra of multiple objects, the state-of-the-art spectrometer consists of 46 pairs of sliding bars that open and close like curtains. Aligned in rows, each pair of bars blocks most of the sky, leaving a small slit between the bars which allow a sliver of light from the targeted object to leak through. Light from each slit then enters the spectrometer, which breaks down the object’s light into its spectrum of wavelengths. 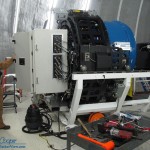 Because everything that’s even somewhat warm radiates in the infrared, all infrared instruments must be kept cold to prevent any trace of heat from the ground, the telescope, or the instrument itself from messing up the signal from space, MOSFIRE is kept at a cool 120 Kelvins (about -243 degrees Fahrenheit or -153 degrees Celsius). This makes MOSFIRE the largest cryogenic instrument on the Keck telescopes.

Astronomers will use MOSFIRE to study the epoch of galaxy formation, as well as the so-called period of re-ionization, when the universe was just a half-billion to a billion years old. The instrument will also be used to investigate nearby stars, young stars, how stars formed, and even brown dwarfs, which are stars not quite massive enough for nuclear fusion to ignite in their cores.

MOSFIRE will also allow astronomers to do riskier—but more scientifically rewarding—research, Steidel says. Taking the spectrum of a single star or galaxy involves precious telescope time and resources. But because MOSFIRE can observe many objects at once, astronomers can afford to take extremely long exposures. Otherwise, such long exposures of single targets would be difficult to justify with limited telescope time and other observing targets waiting in line.