A quandry… Our regular astronomy club meeting was the same night as Keck’s evening with astronomers lecture. These invitation events are presented to donors, featuring a lecture from a professional astronomer beneath the palm trees of the Fairmont Orchid resort. A number of our members go to both events and faced a choice of which event to attend.

A solution was proposed… Cancel the club meeting in Waimea and head for the lecture down at the resort instead. To cap the evening we would bring along a few telescopes to share the sky.

The club setup five telescope ranging from Purrcynth’s 80mm refractor to Cliff’s 24″ Dobsonian. It was an impressive line of telescopes. I setup next to Maureen with her new 10″ SCT, a nice match for the 11″ NexStar I use for public work. Arriving before the guests we had a line of telescopes setup and ready for viewing well before dark. As Venus and Jupiter appeared in the sunset we began providing views to the early arriving guests. 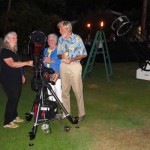 Maureen sharing her telescope with guests at Keck's Evening with Astronomers

The lecture was presented by Dr. Chris Martin of Caltech, covering a subject that is often overlooked, the environment between the galaxies, vast expanses of space that are anything but empty. Here can be found enormous reservoirs of gas, accounting for the majority of normal matter in the universe, something astronomers call the intergalactic medium.

I enjoyed the lecture. Having a somewhat more than average astronomy education, I find so many public lectures a bit repetitive, I have heard it before. Not this night! Dr. Martin covered a lot of material I had never previously encountered. How the universe is filled with streamers of moving gas, influenced by the gravity of dark matter the gas streams into the galaxies and clusters of galaxies, allowing the formation of new stars in an extraordinarily dynamic process. It was a view that has altered the way I see the universe.

At the end of the lecture the audience descended on the telescopes, or maybe it was the dessert bar behind us. It was a pretty good night. The clouds that covered half the sky at sunset retreated back towards the mountains without daytime heating. After the lecture much of the sky was clear, the stars of Orion, Gemini and the other winter constellations bright overhead.

There was quite the array of planets to chose from… Jupiter was still up high enough to view early, before the lecture. Venus has begun to show a nice crescent phase. Mars is still close enough, over a month after opposition, to show some detail. Late in the evening Saturn appeared over the trees, high enough for a decent view.

While the seeing was a bit soft, blurring high magnification views of the planets, the views were not horrible. I simply used the opportunity to explain why astronomers built telescopes atop mountains and why we equipped the large telescopes with adaptive optics systems.

A pleasant evening enjoyed by all. Setting up telescopes on the coast, under the palm trees, with a warm sea breeze is quite a change from our usual mountain haunts. An appreciative crowd of viewers makes the effort more than worthwhile. I hope we can do this again sometime.