A team of American, Canadian and Chilean astronomers have stumbled onto a remarkably faint cluster of stars orbiting the Milky Way that puts out as much light as only 120 modest Sun-like stars. The tiny cluster, called Muñoz 1, was discovered near a dwarf galaxy in a survey of satellites around the Milky Way using the Canada-France-Hawaii Telescope (CFHT) and confirmed using the Keck II telescope, both of which are on Mauna Kea, Hawaii.

“What’s neat about this is it’s the dimmest globular cluster ever found,” said Ricardo Muñoz, an astronomer at the University of Chile and the discoverer of the cluster. A globular cluster is a spherical group of stars bound to each other by gravity so that they orbit around a galaxy as a unit.

“While I was working on the Ursa Minor dwarf galaxy I noticed there was this tiny little object close by,” Muñoz recalled. He made the discovery while he was a postdoctoral associate at Yale University. Most globular clusters have in the range of 100,000 stars. Muñoz 1 has something like 500 stars. “This is very surprising,” he said. 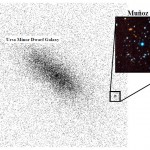 The Muñoz 1 globular cluster is seen to the right of the Ursa Minor dwarf galaxy in this image from the Canada-France-Hawaii Telescope MegaCam imager.

“It’s ridiculously dim,” agreed Yale astronomer Marla Geha. “There are individual stars that would far outshine this entire globular cluster.” That puts Muñoz 1 head-to-head with the Segue 3 globular cluster (also orbiting the Milky Way) as the dimmest troupe of old stars ever found.

Muñoz 1’s discovery was the result of a survey done with the CFHT MegaCam imager in 2009 and 2010. It was then confirmed by spectroscopic study using the Deep Extragalactic Imaging Multi-Object Spectrograph (DEIMOS) on the Keck II telescope. The researchers will be publishing their results soon in The Astrophysical Journal Letters.

The Keck data was critical for the study, said Geha, because it sorted out whether or not Muñoz 1 and the Ursa Minor dwarf galaxy were moving together.

“Nearly every galaxy has an entourage of globular clusters,” said Geha, “so we first thought that Muñoz 1 might be associated with the nearby Ursa Minor dwarf galaxy.” By using spectroscopic data to measure the relative velocities of the cluster and the dwarf galaxy, they discovered quite the opposite was the case.

“The velocities turned out to be wildly different,” said Geha. So the fact that they are near each other is just a coincidence, she said. What has been seen is more like a single snapshot of two cars traveling near each other and apparently together, but they really have different destinations and are traveling at very different speeds. Analysis of the brightness and colors of the stars belonging to Muñoz 1 and Ursa Minor also suggests that the tiny cluster is actually located about 100,000 light years in front of the dwarf galaxy.

As for how Muñoz 1 came to be so dim, a likely scenario is that it has gradually lost stars over the eons, said Geha. It’s also possible it was stripped of stars by passing through the Milky Way. But the direction of the cluster’s movement is not yet known, so it’s not known whether it has passed through the Milky Way.

Perhaps the most intriguing aspect of the discovery is the possibility that Muñoz 1 may be hinting that there are many more such globular clusters in the Galactic halo. After all, the CFHT survey covered only 40 square degrees of sky out of 40,000 square degrees in the entire sky.

“Assuming that we’re not just lucky to have found something very rare, there could be many others out there,” said Geha.

“To truly understand its nature, we will need to measure its mass,” added Munoz. To do that, astronomers would need to measure the velocities of individual stars in the cluster and see how they move with relation to each other. That, in turn, reveals the overall mass of the cluster. A lot of mass would suggest there is a lot of dark matter holding the cluster together, and maybe even qualify the cluster as the smallest, darkest galaxy ever discovered. Right now the Segue 1 dwarf galaxy holds that record. Geha was also involved in measurements with the Keck DEIMOS instrument that confirmed the nature of Segue 1.

“The goal of this survey was to understand the difference between dwarf galaxies and globular clusters,” said Geha. Muñoz 1 suggests there may be plenty of borderline objects out there waiting to be found, which could help sort that matter out.

A pdf of the paper is available at http://www.cfht.hawaii.edu/en/news/Munoz1/munoz12.pdf.