For years the search for exoplanets has largely been like Gulliver’s visit to Brobdingnag: colossal systems of giant gas planets orbiting mammoth stars. But astronomers have finally landed on the shores of Lilliput. They have found a tiny star with three puny planets, each smaller than Earth, zooming around it.

The three small exoplanets orbit a star called KOI-961. Their radii are calculated to be 78, 73 and 57 percent that of Earth. The sizes of the planets were worked out by Kepler Telescope observations that measured the dimming of the star KOI-961 as each planet passes in front of it. This plus crucial information about the star from Keck and Palomar telescopes enabled researchers to determine the sizes of the planets.

Although the masses of the three planets are unknown, they are suspected of being rocky, like Earth, Venus, Mars and Mercury. But they orbit too close to their star to be in the habitable zone where liquid water could exist. The three planets take less than two days to orbit around KOI-961, which is a red dwarf with a diameter one-sixth that of our sun, making it just 70 percent bigger than Jupiter.

“This is the tiniest solar system found so far,” said John Johnson, the principal investigator of the research from NASA’s Exoplanet Science Institute at the California Institute of Technology in Pasadena. “It’s actually more similar to Jupiter and its moons in scale than any other planetary system. The discovery is further proof of the diversity of planetary systems in our galaxy.”

Red dwarfs are the most common kind of star in our Milky Way galaxy. The discovery of three rocky planets around one red dwarf suggests that the galaxy could be teeming with similar rocky planets. 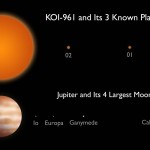 “These types of systems could be very common in the universe,” said Phil Muirhead, lead author of the new study from the California Institute of Technology in Pasadena. “This is a really exciting time for planet hunters.”

Muirhead’s team used data publicly released by the Kepler mission, along with follow-up observations from the Palomar Observatory, near San Diego, and the Keck Observatory on Mauna Kea in Hawaii.

The researchers determined the sizes of the three planets (called KOI-961.01, KOI-961.02 and KOI-961.03) with the help of a well-studied twin star to KOI-961, called Barnard’s Star. Spectra of both stars obtained by the Keck I telescope’s High Resolution Echelle Spectrometer (HIRES) show the stars to be almost identical. By matching KOI-961 with Barnard’s Star in this way, they could then work out how big the planets must be to have caused the observed dips in starlight.

In addition to the telescope observations, the team used modeling techniques to confirm the planet discoveries. Their measurements dramatically reduced the sizes of the planets from what was originally estimated from Kepler measurements.

“Astronomers are just beginning to confirm the thousands of planet candidates uncovered by Kepler so far,” said Doug Hudgins, Kepler program scientist at NASA Headquarters in Washington. “Finding one as small as Mars is amazing, and hints that there may be a bounty of rocky planets all around us.”

The Kepler Mission is a space telescope launched by NASA in 2009 that measures light from 150,000 stars. Scientists working with Kepler data look for changes in stellar brightness that suggest a transit, or a planet passing in front of a star. They use measurements of the star’s luminosity to determine whether the planet is in a “habitable zone,” an area where the planet would be stable and conditions hospitable to life could exist.

The W. M. Keck Observatory operates two 10-meter optical/infrared telescopes on the summit of Mauna Kea on the Big Island of Hawaii. The twin telescopes feature a suite of advanced instruments including imagers, multi-object spectrographs, high-resolution spectrographs, integral-field spectroscopy and a world-leading laser guide star adaptive optics system which cancels out much of the interference caused by Earth’s turbulent atmosphere. The Observatory is a private 501(c) 3 non-profit organization and a scientific partnership of the California Institute of Technology, the University of California and NASA.