A commentary from Larry O’Brien:

Recently, a video filmed at Honokohau Harbor has brought shame to our island. The video depicts some young people landing a large Tiger shark on the rocks at the harbor entrance. The tackle used is ropes tied to the land. This was neither fishing for food or sport-fishing where the animal is fought with a rod. It was simply disrespect.

The shark is an important part of the Hawaiian culture. For some, the shark is ‘aumakua. But for all, the shark was respected, not a plaything: “In old Hawai’i, catching the niuhi was the game of the chiefs, a dangerous sport for which special techniques were developed, according to historian Mary Kawena Pukui. Eating niuhi flesh was also taboo to women.”

Today, sharks are globally threatened by the finning industry, which wastes the life of the shark for a few pounds of fin. Meanwhile, live sharks are an economic benefit to the dive industry. Shark dives bring in at least $125,000,000 per year globally and any Big Island dive operator can attest to the enthusiasm that’s generated even by a small reef shark.

Further, the sharks at Honokohau are well known to the community. Everyone knows Laverne, the largest resident female, but the shark in the video is Tony. (Tony survived: He was filmed by some divers two weeks after the video was shot.) You can see photos of Tony and the other tiger sharks of Honokohau at http://milisenphotography.yolasite.com/tiger-shark-id.php.

When the young men in the video returned the shark to the water, they were putting a large injured predator back into an area where dozens of people swim every day. Alua Beach, a popular place for families to bring keiki, is only a few hundred yards from where the shark was landed. There are multiple dive sites within a quarter mile to either side of the boat channel.

As with most regular divers at Honokohau, I’ve watched the sharks and the sharks have watched me. I’ve never forgotten that these are apex predators and need to be treated with respect (and watched from a distance). The sharks are there because it’s their natural territory and, probably, because of scraps from fisherman. There’s never been a shark attack reported at Honokohau.

– Sharks are important and culturally respected by native Hawai’ians; and – Sharks are not targeted by shore-fisherman for either sport or food; and – The area is frequented by swimmers, SCUBA divers, and free divers:

I would ask that the County of Hawai’i and/or DNLR to declare the area near the entrance of Honokohau Harbor as a “niuhi conservation zone” and forbid the intentional targeting by fisherman of large sharks within that area. The ban should forbid the use of hooks larger than those used for commonly-targeted sports and food fish and the use of anchored ropes or chains for fishing.

I dove with the usual crew the day before, but I did not go out with them Sunday. Now I am wonder if I should have. They came back with a fish tale and the video to prove it…

Lavern is a well known fixture around the entrance to Honokohau Harbor. She is big and easily identified through the messed up dorsal fin. She has not eaten any divers… yet.

Three days after we dove the site, a great white shark attacks a diver at the same site. The man was skin diving and spear fishing at O’oma, what the surfers call Pine Trees. The diver was not injured, the shark attempted to steal his catch and from the story might have escalated the attack if the diver had not gotten out of the water. Sounds like there were some photos taken of the shark from shore, but none seem to have surfaced yet.

Interestingly, the diver described the shark as injured, perhaps a reason the shark was attempting to grab an easy meal on the reef instead of the usual pelagic prey?

At the very north end of the Mauna Lani resort complex, just beyond the gates into The Fairmont Orchid is a very nice public access to the coastline. With well maintained facilities, this park attracts local and tourists alike to the water. There are full bathrooms, a fresh water shower, picnic tables and barbecue grills to use amongst a rich lawn and pleasant shade trees. The coast here is a picturesque combination of blue water and black volcanic rock jutting into the sea. The parking is limited to a couple dozen spots just behind the park. The site can be used equally well by divers or experienced snorkelers with a rich coral reef just offshore the beach here.

The entry here is rough cobble and rock, care must be taken to scout a course through the many offshore rocks that complicate swimming to and from the beach. When the seas are calm, there should be little if any trouble getting to and from shore, do not attempt this area if there is any substantial surf to deal with. 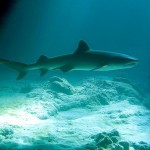 Reaching the site is fairly easy, following signs to the beach and to the petroglyphs through the Mauna Lani resort. Turn into the Mauna Lani resort from the Queen Ka’ahumanu highway at the obvious grove of tall palms surrounding the entrance. A little over a mile across the lava flows will bring you to a large roundabout (traffic circle in American). Turn on the first exit from the circle, heading north through the condominiums and town homes. A couple miles more will bring you to the entrance to the Fairmont Orchid. Just before the entrance a right turn leads down a paved road to the park. 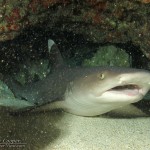 A Whitetip Reef Shark (Triaenodon obesus) under a ledge at Holoholokai

Once into deep water the snorkeling or diving is as good as anywhere along the Kohala Coast, the same reef divers can enjoy at the Puako sites just north. The depth remains quite shallow until about 50 yards offshore where a series of steps can be found, the first dropping to 15-25ft and another just past this dropping yet further. The vertical walls of these steps are rich in coral and life. The shallow step provides the best place for snorkeling, while divers will quickly head for deeper water. Eels, octopus and other rich marine life are all to be seen here.

There are several very nice caves for divers here. Trending south from the entry area, one will encounter a surge channel in the coral. Two nice caves are found along this small canyon. The better of the two is on the north side where a low entrance at the base of the wall leads to a 40 foot diameter chamber with a large skylight. Sleeping white tip sharks are common in the caves and overhangs here, particularly first thing in the morning.

The parking lot also serves as a trail head for a three-quarter mile walk to the Puako Petroglyphs, a large collection of ancient Hawaiian rock art that is found in photos and guidebooks all across the islands.

Holoholokai makes for a nice beach experience with a pleasant park and good access to the water. Worth considering if looking for a place to get to the water amongst the resorts of the Kohala Coast.